Gary Warner, a lifelong rugby league lover who has a 25-year association with the Doncaster Toll Bar community club, has delivered a huge boost to the RFL’s popular and groundbreaking Champion Schools competitions by signing a sponsorship deal on behalf of his company, Warners Fish Merchants.

Warners is a family business that was established in Doncaster in 1941, and they are the leading importers of Icelandic frozen-at-sea haddock and cod in the UK. Warners sponsor Rhinos youngsters Cameron Smith, Owen Trout and Harry Newman as well as our very own Ronnie the Rhino.

The RFL have been running the Champion Schools for more than three decades, with the final of the Year Seven Boys competition firmly established as a curtain-raiser to the Challenge Cup Final at Wembley every summer – and known as the Steven Mullaney Memorial Match in tribute to a youngster who scored a superb solo try in the 1986 final, before he was killed tragically young in a road accident the following year.

The Champion Schools include girls and boys competitions for all Year-groups within the secondary school setting (from Years 7 to 11), involving more than 20,000 children from the traditional Rugby League heartlands but also the North East, the South and Wales.

As such, it is a hugely important competition for the game, but also one with considerable running costs – meaning the financial backing for the Warner Champion Schools 2019 will make a major difference.

For Warner, who supports Leeds Rhinos and has already provided personal sponsorship to a number of their young players, that makes this deal the perfect fit – especially as it also provides the opportunity to correct some misconceptions about the benefits of eating fish – even with chips!

“I love rugby league, and coaching the youngsters at Doncaster Toll Bar means I know how much they enjoy playing the game,” he explained.

“The sport offers so much to families, and youngsters benefit so much from playing in a team environment.

“So I’m delighted to be able to support the RFL’s Champion Schools competition, which provides such a great incentive for so many boys and girls to play the game.

“Funnily enough Cameron Smith, who is one of the players I sponsor at Leeds Rhinos, was a Champion Schools winner himself a few years ago.

“And what a great day to announce our sponsorship of the Warner Champion Schools 2019 – Fish and Chip Friday!

“In addition to our record on sustainable fishing, Warner are proud of our involvement in the fish and chip industry. It’s long been established as Britain’s favourite family dish, and that popularity and the range of nutritional value from our fish means it can be eaten as part of a healthy active lifestyle.”

So far this year two of the 10 Warner Champion Schools for 2019 have been determined – Castleford Academy beat Astley High School from Northumberland in the Girls’ Year 11 Final, and Outwood Grange Academy from Wakefield beat Saddleworth to win the Boys’ Year 11 competition.

There will be six more finals on National Warner Champion Schools Finals Day, which will be staged at Warrington’s Victoria Park on Friday July 5 (details below).

The Girls’ Year 7 Final between Castleford Academy and St John Fisher of Dewsbury is to be staged before a Women’s Super League fixture in the coming weeks.

And four schools are dreaming of a Wembley appearance in August, as Great Sankey of Warrington, Brooksbank of Elland, Standish of Wigan and the 2018 winners, Wade Deacon of Widnes, have qualified for the Boys’ Year 7 semi finals.

Warner Champion Schools 2019 – to be played at Victoria Park, Warrington on July 5, unless otherwise stated 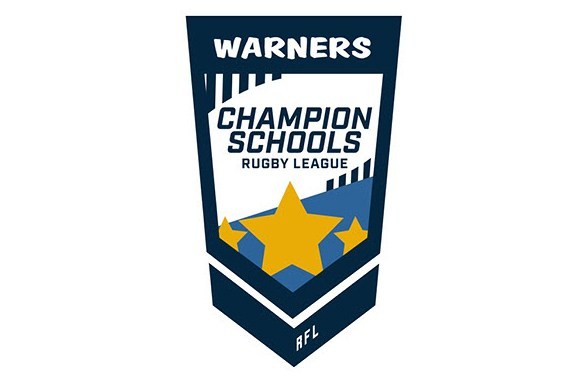