McLeod’s Fish and Chips, formally known as Charlies Chippy on Grant Street Inverness, has won the Best Fish and Chips in Scotland at Scotland’s Business Awards, which took place in the Glasgow Marriot Hotel last week.

The competition is a yearlong process where finalists go head to head during the national event, to see who will be crowned the very best in Scotland in front of a 600 strong crowd. However, the glamourous final is not the beginning, as businesses face public voting stages and mystery shoppers!

McLeod’s Fish and Chips was taken over by Dave McLeod in October 2016, whose efforts have received recognition in the business’ announcement post stating:

‘We would like to say a huge thank you to all our customers and staff for this achievement but most importantly to Dave, without his long hours and dedication he’s put in we wouldn’t be where we are today. We are just absolutely over the moon!!!’.

The chip shop prides itself on its local produce with the fish coming from the Scotland’s fishing capital, founded by fishermen itself, Peterhead. 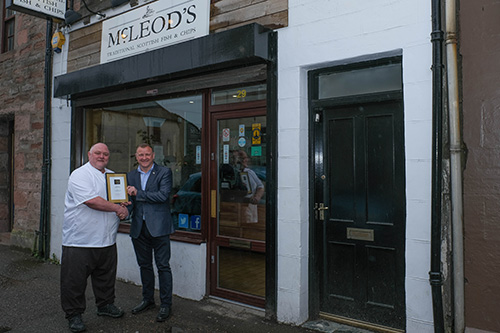 McLeod’s had stiff competition from five other fish and chips shops across the country, but the community favourite took the award home. Fans of the chip shop were delighted with the win, when the business took to Facebook to share the winning statement, followers left many congratulatory comments such as:

‘Congratulations to you all, you did yourself and Inverness proud, you have made the whole of Merkinch proud, you’re a great asset to the community - well deserved!’ – Donna Chinskie

‘So absolutely proud of you all! Congratulations you are fantastic.’ – Catherine Fraser

Inverness MP, Drew Hendry also got in touch to congratulate the team on their award, he said:

“Small independent businesses are the backbone of our city and it’s  great that we can now boast that we are home to the nation’s best chippy. A huge congratulations to Dave and his team on this fantastic achievement and long may their success continue.”

McLeod’s attribute their success to their customer service values, noting the importance of knowing their consumers and how it’s the customers that bring in the real buzz! Not only do McLeod’s value their customers, they also understand the importance in getting involved with their community. The business sponsors a board at Clach Park and provides the sacred half-time pies from the Pie Shed at matches. Mr McLeod notes that all the proceeds made from these sales go straight back to Clachnacuddin! Mr McLeod also mentioned his delight at the award, stating he felt fantastic about the results and couldn’t have done it without his brilliant team.

It is clear to see that this is not any ordinary Fish and Chip Shop and Dave has some exciting plans for the future…watch this space, as McLeod’s Fish and Chips is clearly the catch of Scotland! 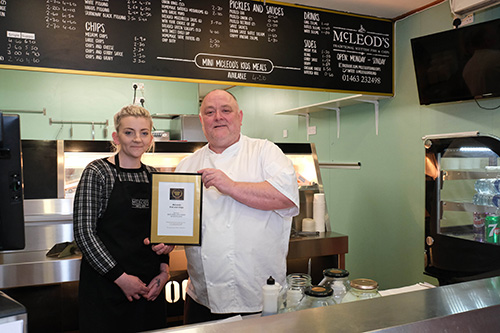