Ilfracombe based fisherman Ben Bengey has been named Young Fisherman of the Year as part of a national competition that shines a light on the commercial fishing industry in the UK and Ireland.

Ben, who works on his own vessel the Shelly N, was announced as the winner at the Fishing News Awards, which took place in Aberdeen on Thursday 16 May.

The Young Fisherman of the Year award, sponsored by the seafood public body Seafish, recognises fishermen under the age of 25 who have made a clear commitment to the industry. 22 year old Ben was shortlisted alongside William Mackenzie of the Lapwing in Peterhead, Ross Sutherland of the Arcturus in Lerwick and Colm O’Brien of the Aoibh Aine in Sligo.

Ben was commended by the panel of fishing industry judges for his enthusiasm and commitment to the wider fishing community in Ilfracombe and North Devon. He is also on the crew of the Ilfracombe lifeboat and is currently undergoing training as a helmsman and then coxswain.

On winning the award, Ben said: “I was very shocked to win the award since I was up against tough competition. It’s nice to get recognised for doing something good in the industry when all you seem to hear is bad news at the moment. I would like to thank all the skippers and crews I have worked with for all the skills and knowledge they have passed on, things I can now pass on to my crew. I would also like to see more young fisherman coming in to the industry.”

Marcus Coleman, CEO of Seafish, said: “This award raises the profile of the young people who are eagerly carving a career in the fishing industry. Ben and the other three finalists are inspirational and demonstrate how rewarding a career in fishing can be, with training available to support almost all fishing career paths. They are all excellent role models who we wish all the best in the future.”

The Fishing News Awards recognise excellence in 13 different categories and shines light on the achievements, expertise and innovation within the UK and Ireland’s commercial fishing industries. 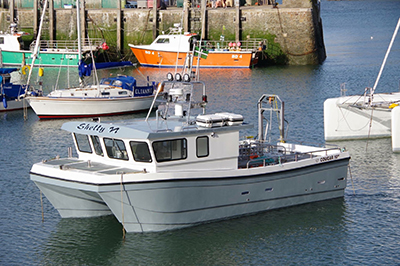