Celebration is on the menu for a York restaurant and takeaway after winning a brace of gold awards in a national competition.

Scotts Fish and Chips tasted double success in the National FreeFrom Eating Out Awards, where it won a gold award in both the Best Fish and Chip Shop and the Focus on Gluten categories.

The FreeFrom Eating Out Awards is an annual awards ceremony that was held this year at London Excel. The awards ceremony celebrates innovation and FreeFrom excellence in the food service industry and awards are given out to eateries that understand how to cater safely for food allergic people.

The restaurant’s success in the Focus on Gluten Category followed on from the restaurant retaining its GF (gluten-free) accreditation from Coeliac UK – the national charity for individuals with coeliac disease and dermatitis herpitiformus – earlier this year.

Judges were quick to commend Scotts Fish and Chips for its friendly and welcoming atmosphere as well as its proficiency in the service of gluten free food, instilling confidence in customers with gluten free needs.

They said: "I was confident that my GF meal was kept separate; the server taking the main order appeared confident and the GF food was differentiated by using GF flags.

"The food was lovely and presented well. The fish batter was nice and crispy as were the chips. The slice of fudge cake was ‘enormous’ and beautiful; very moist and not too sweet. And all jolly good value.”

Tony Webster, owner of Scotts Fish and Chips, said: "This was the first time we had entered the Free From Eating Out Awards, so winning gold in not one but two categories is a fantastic achievement. It’s another feather in our cap.

"We are very proud of our gluten-free fish and chips, and customers with coeliac disease and a wheat intolerance travel long distances to eat from our menu. They do so because they know they can trust us with its preparation and service, as shown by the judge’s comments.

"We go to great lengths to ensure the ingredients and utensils never get mixed up. The fish is cooked in a separate fryer and is served with gluten-free bread and butter.

"The team here are trained to keep the gluten-free food separate and handled differently to the regular fare, ensuring those on gluten-free diets will know that their own specific needs are taken into account.

"We have an army of regular customers travelling to us on a regular basis, with one customer with coeliac disease making a monthly journey from his Nottingham home.”

Further information about Scotts is available from its website: http://scottsfishandchips.co.uk/

Story By: Scotts Fish and Chips 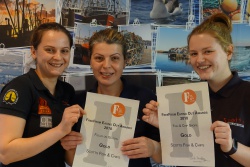