A York micro-brewery’s official launch of its new canned beer range has gone down a treat with real ale and fish and chip lovers alike.

Ainsty Ales Brewery held the event – where it lifted the lid on its Ainsty Assassin, Cool Citra, Flummoxed Farmer and Killa Kiwi canned beers – at Scotts Fish and Chips, located just off the A64 at Bilbrough Top, near York.

Scores of people attended the launch party to be guided through the beers by head brewer Andy Capel, before tucking into a beer-battered fish and chip supper.

Scotts Fish and Chips owner Tony Webster said: "This was a fantastic evening and one that saw the restaurant packed to the rafters with customers looking forward to enjoying a wonderful combination of traditional ales and traditional British food. It really was the perfect pairing.

"And, because of its success, we are now looking at partnering with Ainsty Ales Brewery to host a series of beer and fish and chip nights, here at Scotts.”

Further information about Scotts Fish and Chips is available from its website, https://scottsfishandchips.co.uk/

Further information about Ainsty Ales is available from its website, http://www.ainstyales.co.uk/

Story By: Scotts Fish and Chips 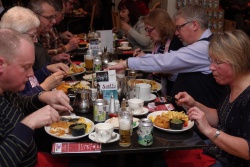