Organised by NEODA with support from Seafish, the public body that supports the £10bn UK seafood industry, National Fish and Chip Day aims to celebrate the British classic and get more people eating fish and chips. This year it will be held on Friday 7 June, with a programme of events and giveaways across the country’s fish and chip shops and restaurants. 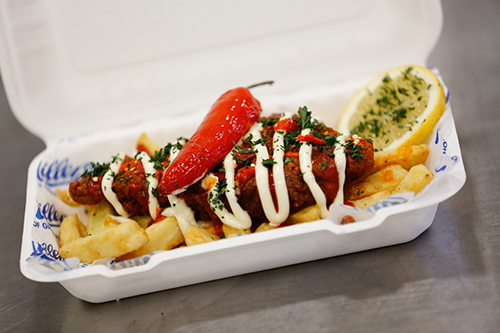 Millers, who are based in Haxby in North Yorkshire, were announced as the overall champions of the coveted title of the UK’s Best Fish and Chip Shop at the 2018 National Fish & Chip Awards. They have been helping to showcase the very best in the nation’s favourite takeaway dish, and challenge the norms ever since.

Their taste-bud-terrifying portion of fish and chips was initially tried and tested by customers back in January 2019, with any brave ‘Fire Eaters’ signing a waiver before tackling on this chilli full challenge. For National Fish and Chip day, the team at Miller’s will be offering free samples of the dish  – which features 10 eye-watering chilli packed ingredients – alongside samples of a specially crafted beer from Brew York. The batter mix includes Buffalo Hot Sauce, Dried Birds Eye Chillies and the now infamous, Seabrook Fire Eaters Scorchin’ Hot Trinidad Scorpion Chili Crisps. 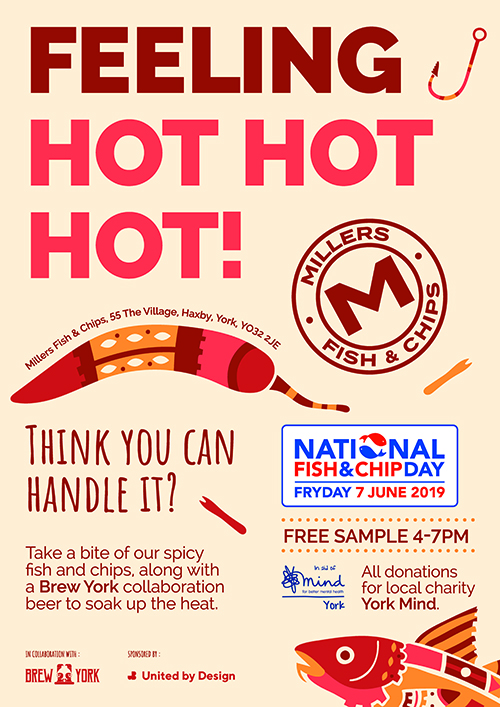 Nick Miller, co-owner of Millers, said: “As well as being known for our award winning fish and chips, we like to try something new every now and then. We’ve already tried the spicy fish and chips with a few customers who said they were lovers of spicy food and they were blown away by the heat. The collaboration with Miller’s and Brew York will be an excellent opportunity for flavour lovers to join us in celebrating National Fish and Chip Day as well as giving back to charity.”

Andy Gray, Trade Marketing Manager at Seafish said: “The Fish and Chip Awards are all about celebrating excellence in the Fish and Chip industry, and we are incredibly proud to see former national champions continuing to raise the bar and set a standard that other businesses can use as a benchmark for quality. Being involved in National Fish and Chip Day is a great opportunity to showcase the UK’s top fish and chip businesses and encourage more people to visit their local takeaway on June 7th”.

The spicy fish and chip offer will be available from 5pm to 8pm at Miller’s Fish and Chips, 55 The Village, Haxby, York – and strictly while stocks last. Miller’s will be sharing reactions on social media and getting involved in all things fish and chip related throughout Friday 7 June for National Fish and Chip Day. Donations from the event will be given to local charity York Mind.

Watch the video on how to prepare the chilli packed world’s spiciest fish and chip batter below: 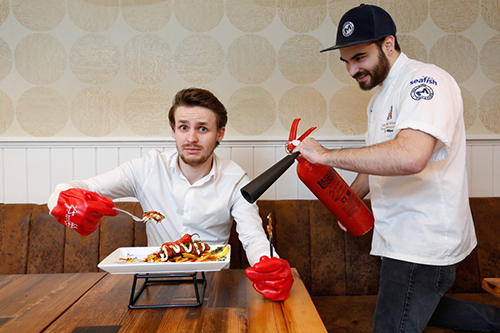