To commemorate the 90th anniversary of the original Harry Ramsden’s in Guiseley, Wetherby Whaler has pledged its support to vulnerable people in Yorkshire.

Leeds Homeless Partnership is a voluntary organisation that supports the homeless community of Leeds. Its group of volunteers help to provide vulnerable people with hot meals, drinks and clothing, as well as access to safe housing.
The portions of fish and chips were prepared by staff at the Whaler’s famous White Cross, Guiseley branch, which was restored back to its former glory in 2012.

It was in May 2012 when the Wetherby Whaler Group invested £750,000 in the refurbishment and restoration of the restaurant, maintaining many of the historic features of the site, including high ceilings, stained glass windows, oak panelling and crystal chandeliers.Caroline Murphy, Director of Wetherby Whaler, said: "It is a momentous occasion for us and everyone connected to Wetherby Whaler. We have made significant investments in restoring the branch to its former glory, building on the fine work and legacy of Harry Ramsden and his family to create a thriving restaurant and takeaway in Guiseley.

"It was only fitting to share the celebration with a deserving local cause, and Leeds Homeless Partnership does a great deal to support people in need across the city. I hope everyone enjoyed their fish and chip suppers!”

Kevin Bell from Leeds Homeless Partnership said: "The Wetherby Whaler is a well-known Yorkshire brand, and the family has made a very generous gesture for the homeless and vulnerable people of Leeds.

"The feedback from all on the night was very positive, and much appreciated. It was lovely to see their faces light up when they realised that someone was aware of their situation and willing to help, especially serving some of the finest fish and chips in the Yorkshire region!” 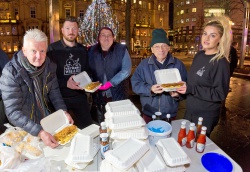