The Real Food Café in Tyndrum, Perthshire, has launched a special Taste of Scotland menu celebrating Scotland’s most infamous food and drink items.

If that wasn’t indulgent enough, the meal is rounded off with a delicious Scottish dessert of Mackie’s Traditional ice cream, a chunk of deep-fried Mars Bar and toffee sauce.

To accompany the meal, choose from either Irn Bru, Scottish craft beer Innis & Gunn Original or Lager, or go all out and enjoy a dram of Oban 14-Year-Old Malt Whisky and a piece of Scottish tablet.

The menu has been designed as a tongue-in-cheek take on Scotland’s national cuisine for visitors to the Loch Lomond and Trossachs National Park and is available for parties of two or more (terms and conditions apply).

Sarah Heward, co-owner of The Real Food Café, commented: "The Taste of Scotland menu offers a showcase of some of the more infamous of our national food and drink items, such as Irn Bru, black pudding and the much loved (and mocked) deep-fried Mars Bar.

"While we expect it to be popular across the board, the menu has really been designed with our international visitors in mind, who are often curious about such delicacies as the Mars Bar and haggis but might be nervous about a full-sized portion!”

As well as the Taste of Scotland menu, The Real Food Café is known for its great-tasting fish and chips and gluten-free fish and chips, which have won numerous awards, including Gold Awards at the FreeFrom Eating Out Awards in 2017 and 2018 in the Fish and Chip Shop category.

The Real Food café also serves an award-winning selection of home baking, including its Gluten Free Chocolate Fudge Cake and Fruit Scone, both of which have previously achieved Great Taste Awards. 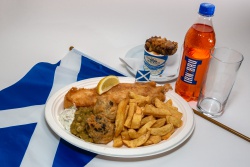