The Fishermen’s Mission in the new Ready, Steady Cook studios!

Fundraising colleagues for the Fishermen’s Mission, Dean Lawrence and Julian Waring are set to hit the screens in the new season of BBCs Ready Steady Cook. Which begins airing after a 10 year break on 2nd March for 4 weeks.

Dean, Corporate Partnerships manager based at Head office and Julian, regional fundraiser from Cornwall. Applied to be part of the show with the hope of increasing awareness for the charity and the wider fishing industry and to encourage more people to eat fish.

“It was a straightforward application and then the producer interviewed us on a live Skype chat and before we knew it, we were being sent the dates and details to film at the BBC Glasgow studios.” Said Julian. “It’s quite a surreal experience, walking into the BBC studios, experiencing the different teams from production to make up, everyone was so friendly and excited about the new show. We started filming at 3pm and before we knew it, it was 7pm. It is exactly like you see on TV, you don’t know which chefs you are going to be paired with the timing for the cooking is real. I looked over and by the time Julian had peeled a carrot and burnt the milk the 20 minutes was up!” Explained Dean.

Presenter Rylan Neal-Clark said a quick hello before we started filming and tried to settle our nerves. Julian was paired up with former Great British Menu winner Ellis Barrie. While Dean was teamed with the equally talented Anna Haugh. A regular on the cooking TV scene. “To see how the chefs can think of meals in seconds, then create 3 dishes in 20 minutes, it was a marvel to watch the skill and creativity.” The series starts Monday 2nd March, look out for the Fish Mish team when they are on, said Dean. 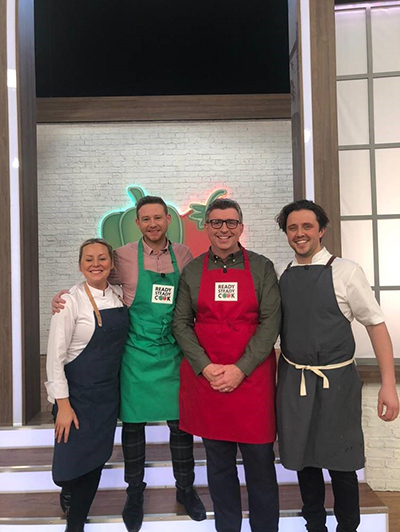