The Codfather Reels in Top Prize for Sarson’s’ Community Initiative

Sarson’s has announced The Codfather in Aylesbury as the big winner in its ‘Proud To Serve Our Community’ campaign, scooping £500 towards its next wholesaler order. The deserving chippy won over judges from the NFFF and charity Hospitality Action with an inspiring ‘pay it forward’ community initiative, helping support its local area during the worst of the Covid-19 crisis.

Sarson’s’ campaign was created to champion the beloved fish & chip shops of Great Britain who rose to the challenge to support their local communities during the pandemic. The Codfather’s ‘pay it forward’ scheme, run in partnership with a local foodbank, encouraged customers to buy something from their menu which they then provided as vouchers. Each donation was matched by the fish & chip shop meaning double the number of vouchers for those that needed it the most.

Codfather co-owner, Juliano Brito admitted he was bowled over by the news: “Wow! Thank you to Sarson’s! Of course, it’s not why we do it, but it’s so nice to be recognised. When Covid-19 hit, there were many people struggling to make ends meet, we saw that the foodbanks were so busy and instantly thought ‘maybe this is something we can help with’. It’s been a great success in the community, we’ve got to meet lots of new people. I also can’t thank our customers enough – the generosity and humanity we’ve seen; for us, it’s the been one of the best things to come out of what has been a difficult few months.”

Grantham’s Galaxy Fish Bar, Lowford Fish Bar in Southampton, Village Fish & Chips in Bromley, Corner Plaice in Rickmansworth and Golds in Bromsgrove, were also awarded £200 each towards the cost of their next wholesale order as a thank you for the support they have shown to local key workers and vulnerable people during tough times.

For every valid entry Sarson’s also pledged to donate to Hospitality Action’s Covid19 Emergency Appeal, helping to support those across the industry (including fish & chip shops) most in need. In all, £200 was raised helping the charity continue its good work.

On the Codfather’s win, Bryan Carroll, Sarson’s Sales and Marketing Director commented: “It’s been truly life-affirming to read the stories of fish & chips shops across the UK putting their communities first during these uniquely challenging times. The Codfather’s efforts embody the sprit and pride of a truly great British chippy and we’re incredibly proud to reward them with the recognition they deserve.

Better still, it is thanks to them and everyone who took to social media to get involved that we’ve been able to take our support one step further and raise money for such an important cause.”

Mark Lewis, CEO of Hospitality Action added: “The mass-closures triggered by the UK-wide lockdown have already claimed tens of thousands of hospitality jobs as businesses have disappeared or greatly reduced staffing levels. Despite the hardship, the industry has proven that it has a big heart as businesses and their staff across the UK have played an important role in helping to feed their local communities, the vulnerable and keyworkers.”

With much of the industry now returning to their fryers, Sarson’s is continuing to support fish & chip shops through recovery with free samples, POS and social distancing signage and support kits available at www.switchtosarsons.co.uk.

With over 15 million bottles sold each year, Sarson’s Malt Vinegar is the UK’s number one malt vinegar brand. Sarson’s is owned by Mizkan Euro Ltd., the European subsidiary of Mizkan Group, a family-owned, Japanese business started in 1804. To find out more: 0203 675 2220 or visit: www.mizkanfoodservice.co.uk 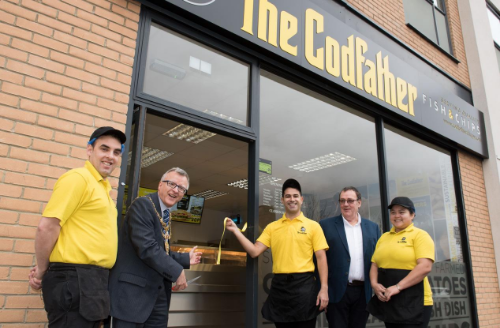