Calling all pie makers across the UK – the 2020 British Pie Awards are now open for entry! The world-famous Awards will be held on Friday 6th March 2020 in Britain’s pork pie capital, Melton Mowbray, with judging taking place on Wednesday 4th March.

This year marks the 12th anniversary of the hotly contested competition. 2019 was aptly dubbed 'The Year of the Vegan’ when, for the first time in the Award’s history, a vegan pie was crowned Supreme Champion. The winning pie was deemed the upper crust out of a whopping 884 pies, entered by 176 talented bakers, butchers and chefs.

The Awards, held during British Pie Week (2nd-8th March 2020), celebrates our nation’s love of pies – an iconic comestible. Hot or cold, sweet or savoury, Brits eat around £1billion-worth of them every year.

There are only a few simple rules that must be adhered to: all pies must consist of a filling totally encased in pastry and baked. All entries must be commercially available in the UK. Entrants can submit their creations for any of the 23 pre-assigned classes.

The 23 pre-assigned classes champion classic recipes such as Beef & Ale and Steak and Kidney, but also cater to a growing variety of dietary preferences with Free From, Vegetarian and, of course, Vegan joining the ranks. Can the vegan category retain its top spot or will a new ‘pie-oneering’ pastry steal a slice of the action?

New for 2020, this year will celebrate flourishing bakers with the introduction of the Best Newcomer Award, an accolade presented alongside the Best Young Piemaker and Small Producer Awards - recognising those just starting out in the industry as well as the grass-roots piemakers that are creating exceptional pies across the UK.

Back by popular demand, the Fish & Chip Shop Pie class is making its return to the British Pie Awards. Entries can be any shape and may weigh up to 660g. If you think you’ve got the best chippy pie in the land, the only rule is that your pie must be sold in Fish & Chip shops.

Matthew O’Callaghan, Chairman of the Melton Mowbray Pork Pie Association and host of the British Pie Awards, said: “We have judged well over 9,000 pies since the Awards were first founded in 2009. During that time the quality and range of pies submitted have increased significantly; a tribute to the craft and skills of the British Pie Maker.

“Each year our panel of around 150 culinary experts and pie connoisseurs have the enviable task of judging entries from around the country, with many of the best pies going on to secure prestigious catering opportunities and national listings. This really is a platform where producers of all sizes can shine!”

How to get involved

Entry to the Awards is now open and will run until 5pm on Friday 14th February 2020.

It’s open to anyone who sells pies commercially in the UK, with a special rate for companies with fewer than five pie makers. Pie makers can enter the awards by filling out an online entry form on the website, where there is also a full list of this year’s classes: www.britishpieawards.co.uk 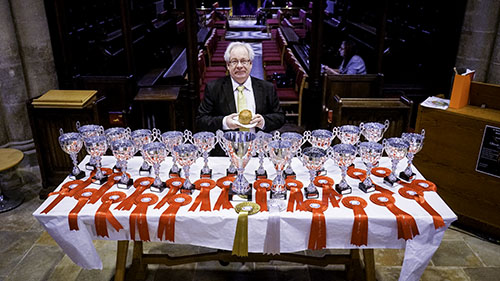