Tony Webster, owner of Scotts Fish & Chips, near York, was amongst scores of guests who attended the opening ceremony at Scotts Chengdu, the first of a chain of Scotts franchises planned of the Far East.

On the back of world-wide publicity about the chippy becoming a magnet for Chinese tourists, Mr Webster was approached by a consortium of Chinese businessmen, led by Jimmy Yu, keen to export the Scotts brand to their home country.

After several meetings the pair struck a collaboration deal, culminating in the weekend’s opening celebrations of Scotts in the city of Chengdu, which is the capital of the southwestern province of Sichuan.

In addition to local dignitaries and celebrities, invitees included Ash Green, the British Consulate-General in Chengdu, and representatives from British Chamber of Commerce, Chengdu, and the China-Britain Business Council.

Mr Webster said: “It was a privilege and an honour to be at the official opening of Scotts Chengdu and I’m very proud that Scotts is now flying the flag for Great Britain in China.

“The opening ceremony was an incredible experience, and it was fantastic to see so many people tucking into traditional fish and chips, prepared and cooked the same way they are in North Yorkshire. And the food tasted great!

“Scotts Chengdu is a fantastic achievement by Jimmy and his team, and I would like to congratulate all concerned in their success in opening this very first shop.

“From the very start, Jimmy wanted authentic British fish and chips, and since meeting we have struck up a very good relationship, working closely in collaboration, with a partnership based on trust, integrity and friendship.

“I know Jimmy has much drive and ambition to build the Scots brand around China and maybe beyond, with more sites planned for 2020 and I look forward to continuing this adventure working closely alongside him and his team.”

Jimmy Yu from Scotts Chengdu, said: "This marks an important milestone for Scotts Fish & Chips, the first ever authentic fish and chip shop to expand from the UK to China.

“We are so pleased to partner with this multi-award winning fish and chip shop and bring the authentic taste all the way from Yorkshire to here, in Taiguli Chengdu.

“Scotts is widely known for its exceptional making of this authentic British dish – from the choice and cut of fish, the secret recipe for the batter, the precise control of the frying temperature and time; here we have the perfect fish and chips.”

“Scotts is an award winning family friendly fish and chip café, and we’re delighted to see that Scotts is ‘frying high’ in one of China’s major southern cities, Chengdu, which is famous for its rich culture and world-renowned food.

“I know that I alone will contribute a lot of support to this restaurant, as I’m not sure I’ll be able to resist the lure of good quality fish and chips in the heart of southwest China, and I travel to Chengdu a lot.”

To create the restaurant, architecture studio Unknown Works 3D scanned fish and chip shops across the UK, and patterns and patinas from both inside and outside restaurants were then imported used to help create Scotts Chengdu. 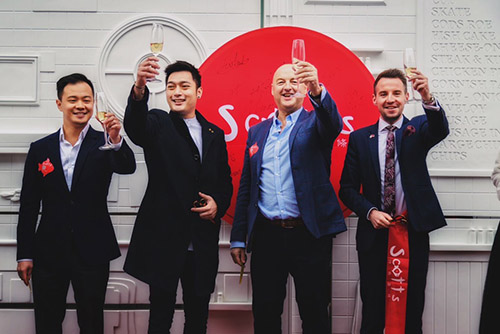