Andrew Crook, President of the National Federation of Fish Friers was recognised for his long standing contribution to the fish and chip industry last week, receiving the Outstanding Achievement Award at the 2019 National Fish & Chip Awards, organised by Seafish. A 19 year veteran of fish and chips, Andrew has served as NFFF President since 2017.

Andrew’s own fish and chip shop is called Skippers of Euxton, Chorley, Lancashire. He follows in the footsteps of his late father who was also a previous President of the NFFF and a winner of the Outstanding Achievement Award at The National Fish & Chip Awards in 2010.

Marcus Coleman, Chief Executive at Seafish, comments: "The aim of the National Fish & Chip Awards has always been to showcase the very best fish and chip businesses and individuals in the UK while setting incredibly high standards for the rest of the fish and chip industry to aspire to. When searching for our outstanding achiever, representatives from across all parts of the fish and chip industry are invited to nominate a person deserving of recognition, and Andrew’s nomination is one that the industry was wholeheartedly behind."

"Through his unstinting hard work and endeavour on behalf of the wider fish and chip industry, Andrew is an extremely worthy winner, and it’s a privilege being able to reward his life-long passion and commitment to the fish and chip trade. Warmest congratulations to Andrew on his outstanding achievement.”

Andrew Crook, NFFF President said: "I was absolutely shocked to be given this award by the industry. It was totally unexpected and, even whilst Marcus was reading out my background and career before announcing my name, it really didn’t click that it was me that he was talking about. The moment was made even more special as I was sat close to two of the people I most respect in the industry, Richard Ord and Mark Drummond."

"Representing the industry as NFFF President is enough of an honour for me. We started the process of revamping the organisation ten years ago and I have worked with so many great people who have all played a big part in getting it to where it is today. I would like to see this award as the industry confirming we are heading in the right direction."

"We have some challenging times ahead in the fish and chip industry but with the people we have in place and a great product we will come through it stronger."

"Thank you all so much and I will continue to do my best to represent and support the industry in any way I can."

For more information about fish and chips: www.fishisthedish.co.uk/win/national-fish-chip-awards or follow @fishisthedish. 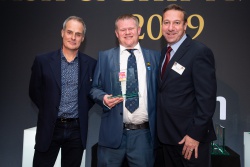