From Bilbrough to Chengdu! Yorkshire Chippy Boss Unwraps News Of A “New Cod” On The Block In China

A North Yorkshire chippy that made national and international headlines last year as a must-visit destination for Chinese tourists could soon be opening in one of the country’s major southern cities.

Tony Webster, the owner of Scotts Fish & Chips, has agreed a deal in principle with a consortium of Chinese businessmen to open in partnership an “authentic” Scotts in Chengdu, the capital of the southwestern province of Sichuan.

Since Chinese President Xi Jinping was treated to fish and chips by former British Prime Minister David Cameron in 2015, visiting a chippy is now seen as a must-do for Chinese tourists visiting the country, and last year, Scotts’ became the chippy of choice for scores of coach parties passing through Yorkshire.

The marketing strategy they devised saw Scotts launch a Chinese website on Weibo, using the Wechat messaging app because Facebook and Twitter are banned in the China, and translate its menu into Mandarin and Cantonese, which can be downloaded on smartphones and tablets via a QR code.

Tony said: “In 2017 we had very few Chinese customers, but thanks to a focused  marketing strategy a trickle turned into a flood. Because of this it attracted the attention of the worldwide media.

“The subsequent publicity we received was simply phenomenal and resulted in Scotts becoming a household name both here and abroad. On the back of this I was approached by a consortium of Chinese businessmen keen to recreate Scotts in the southern Chinese city of Chengdu.

“I’ve now agreed in principle to work in partnership with them, which will see the Scotts brand opening in this city of 7.5 million people. It will be a facsimile of what we have alongside the A64 at Bilbrough. This is an incredibly exciting prospect – one that I could never have imagined 12 months ago. 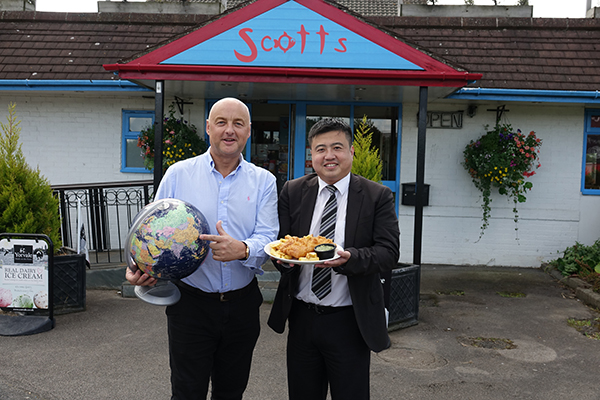