Dropping prices are putting the UK catching sector under pressure amid the coronavirus pandemic, industry figures have warned. Year-on-year prices have dropped by more than a third at auctions still operating across the UK, according to industry body the National Federation of Fishermen’s Organisations.

Exported species, such as monkfish and hake, are particularly affected, industry sources have suggested. British fishing boats export most of their catch to Europe and Asia, where markets have been most affected by lockdowns to control the spread of the coronavirus outbreak.

The situation had led some fishermen to voluntarily tie up their vessels to avoid landing catches that could crash prices further, the NFFO added.

Leading figures in the British fishing industry have asked the fish and chip industry to give British hake a try on their menu.  The NFFO cites hake as the ‘most sustainable UK fishery’.

Laurence Hartwell, ex skipper has said “Despite the logistics issues many small inshore boats are continuing to fish - many by selling fish directly to customers or wet fish shops etc.

However, it is a different story for the bigger boats that target a much smaller number of species and make landings in tons of fish. This seems particularly so for the boats catching hake. The Cornish fleet of 15 MSC Certified hake boats are managing their trips and landings so as not to flood the markets at any one time - landing to Newlyn, Plymouth and Brixham. Prices have dropped - sometimes badly to around £1.50/kg (some boats even have to lease quota @50p/kg) but at that level with full crews and trips it is not payable. For the Scottish trawl fleet now catching hake (which was never a fish landed in any quantity until recent years) 10-15p/kg is not even worth letting go the ropes for!

Many fish and chip shops in Cornwall now have hake on their menus - which has helped move hake from an export only market to a growing UK outlet. One of my buyers pals now sells 80% of the hake he buys on Newlyn and Brixham into the UK - ten years ago he exported the same % to Spain - so things are changing.  Chefs like Nathan Outlaw and Tom Aikens regularly push hake when they appear on progs like Masterchef or Saturday Kitchen.”

For more information, contact a local wholesaler/processor (Many of the Newlyn merchants also buy on Brixham and Plymouth)

Best to contact Barry Young who heads up Brixham Trawler Agents, the fish auction company there: 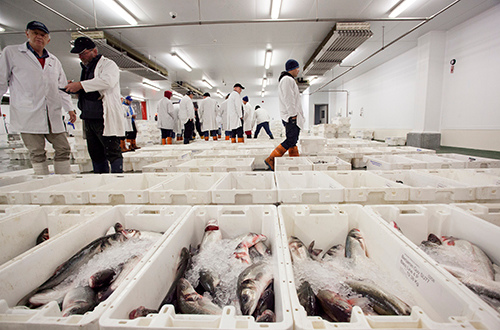