To celebrate National Fish and Chip Day, Cambridgeshire potato merchant Isle of Ely Produce have launched a new platform to promote the great British Chip. Its aim will be to carry on the good work it has been promoting via their hugely successful open days, and the ‘Field to Frier’ award it sponsors at the National Fish and Chip Awards.

The Chip Ambassadors will become part of an UK wide group of shop owners and fryers who will promote best practice for potato buying, storing and of course frying. The chain will also include key growers too, as IOE looks to cement the relationships they have grown across the whole supply chain over the last ten years.

An important area where these new ambassadors will be utilised is to sample any significant new varieties that come into the marketplace. With this in mind Agrico have partnered with Isle of Ely Produce to bring two such varieties into the trade initially via our Chip Ambassadors.  The two varieties Babylon and Lugano will be sampled at some of the CA’s to back up the results of early trial successes. 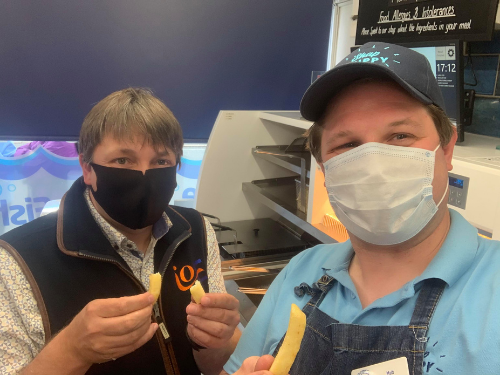 One of the first shops to sign up to the scheme is Shapp Chippy, near Penrith. Matt Phillips co-owner said. “We are delighted to get involved with this as we have seen the good work Isle of Ely do at their open days, this will take that work into the chip shops themselves, where we can report on various issues we have with the potatoes and or varieties which in turn can be fed back to the merchants & growers.”

Oliver Boutwood Isle of Ely Director says. “We have met so many great chip shop owners over the years, all who have brilliant knowledge of what it takes to choose, store and of course fry a potato. We have supplied enough potatoes during that time to serve over 600 million portions of chips. This new scheme will give us even more information across the UK, that we can use to make sure we have the right variety in supply at all times.” 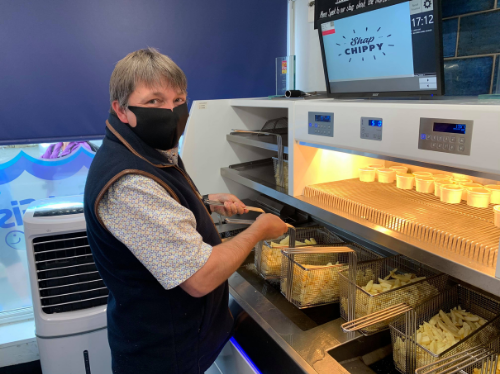 To help launch the scheme Oliver visited Shapp on the eve of National Fish & Chip day, to try Babylon for himself.

He said “It was great to visit the Shapp team and see their knowledge and enthusiasm first-hand. To have our Chip Ambassadors trying samples and giving us valuable feedback is valuable for the whole industry. Babylon offers the customer outstanding frying and eating qualities that challenge Agria, whilst Lugano offers a sustainable future for the grower in the fight against potato cyst nematode (PCN), while producing excellent frying and eating quality for the customer.”

“Our varieties have made up a large proportion of the potatoes supplied to the chip shop sector over the years. However, previously we have had very little interaction with the shops themselves. We are thrilled to be working closely with the Chip Ambassadors to launch two of our exciting new varieties. As a business we are always trying to breed better tasting and more sustainable potato varieties. In Babylon and Lugano we have both! We place a lot of emphasis on product management and this link with the Chip Ambassadors, Isle of Ely and the growers will help us ensure that each area of the supply chain know how to get the best out of Agico varieties, to give the end customer the best chips they can buy.”

Email austen@isleofely.co.uk if you too would like to become a Chip Ambassador. 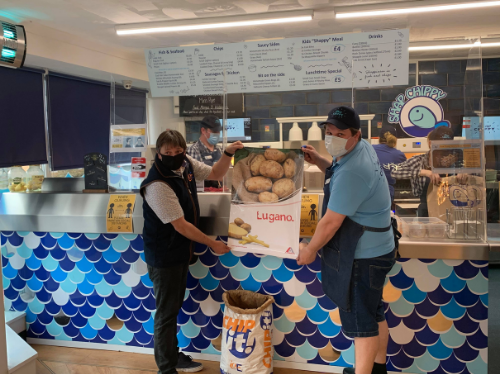