Restaurateur John Molnar – from the Cod’s Scallops in Carrington, Bramcote and Long Eaton and the Nelson in Burton Joyce - has been recognised for his support and great work in the local community - including fundraising and supporting local groups.

His achievements include raising an amazing £60,000 for Maggie's – over the last three years – based at the City Hospital Maggie’s offers professional support to people with cancer and their loved ones.

John was presented with the Special Recognition Award, sponsored by Eden PR, at the annual Nottingham Restaurant & Bar Awards - a celebration of the food and drink industry that the city and the county has to offer. The 2019 winners and nominees in 15 categories were announced at a spectacular Awards Ceremony held at Colwick Hall Hotel attended by 300 people from across the restaurant and bar industry.

John personally undertakes challenges to raise money – he has run the Great North Run twice for Maggie’s as well as the Robin Hood Marathon. John is also in the top 5 per cent of personal fundraisers on Just Giving for his annual Robin Hood Half Marathon efforts for Maggie’s.

In addition, his venues hosting events, such as the Cods Scallops host festive events for both less fortunate families as well as with Age UK – providing a free chippy lunch.

Through Tasty Tuesdays he has donated food to a homeless shelter in the city. The Cods Scallops is also in the process of launching Food Waste UK where any food left overnight is advertised on an app and collected by less fortunate people. The Cods Scallops also raises money for the other charities such as Fishermen’s Mission - the only fishermen’s charity that provides emergency support alongside practical, financial, spiritual and emotional care.

John comments: "It’s really important that we do our bit. We regularly support local causes, through charitable donations, and hold charity quizzes every month each for a different local cause. Since we took over the Nelson last June, we have raised £2500, and our ambition is to raise at least £10,000.

"I’ve always tried to help people less fortunate, from employing ex young offenders and drug addicts to donating hot meals for the homeless. After working with Maggie’s Cancer with collection boxes, I came up with the idea of adding £1 to everyone’s bill."

"As well as charity work our businesses are passionate about helping the environment with a bid to use less plastic and only using sustainable produce whenever possible. We have just featured in Giles Cohen’s new book Truth, Love and Clean Cutlery which highlights businesses that serve good food in an ethical and sustainable way.”

Originally from Nottingham, John has been in the trade over 30 years, starting when he used to skip school to help his Dad in the kitchen at his restaurant in Derby. After catering college, he started a Youth Training Scheme at a four-star hotel in Nottingham and has travelled everywhere from Scotland to Newcastle and even Bermuda!

Kathryn Greenwood, Joint Managing Director of award sponsors Eden PR who presented the accolade added: "John is a worthy winner, we had a huge number of entries for this category and there are some amazing venues across Notts who do great work in the local community. John stood out because he gets so involved personally and is a real inspiration.”

Annie’s Burger Shack and Perkins Bar and Bistro were runners up for the award the Plough at Normanton received a special mention.

A hugely popular winner, when John was announced he received a standing ovation from those attending the awards event.

His latest project is a Top Floor Development launched in November 2018 and is a unique dining concept where customers can dine on the perimeter of a professional kitchen. It’s a warehouse-style private dining room that seats up to 24 and tickets are sold on an individual basis or the whole venue can be hired exclusively for bespoke events. As well as ticketed three-course and five-course events, he regularly holds one-off pop-up nights, such as a recent Meat & Malbec and Tour of Italy events. 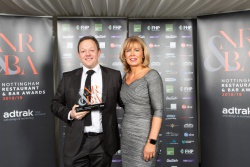